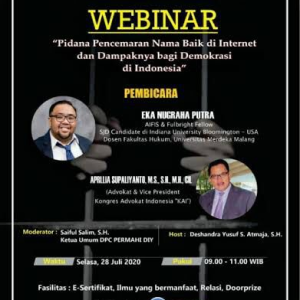 Online Criminal Defamation and its Effect on Indonesia’s Democracy

As bullying cases that happened in campus become the current phenomenon in the education sector nowadays, University Merdeka Malang sees that the issue has to be taken seriously. Whether it’s done by the student to another student or the lecturer to the student or vice versa this uptrend of bullying done in a study environment is likely to be seen everywhere in the media. Thus, as a response to bullying and abuse cases in college as the counter bullying UMM invited the organisation which is concerned on cyberbullying issues called BULLYID.